Phi Kappa Psi is happy to announce the consultant teams for the 2017-2018 academic year. These men are responsible for maintaining relationships with our undergraduate chapters and volunteers throughout the year as well as working with our new and established colonies to reach the point of chartering. 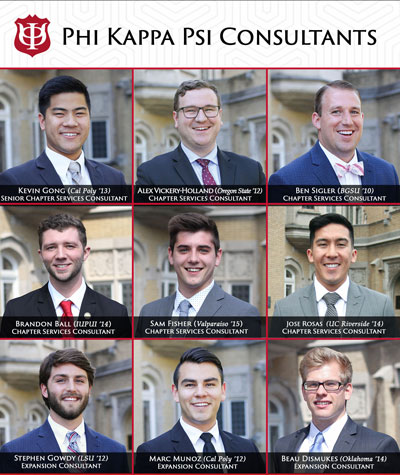 Two Expansion consultants, Stephen Gowdy (LSU  ’12) and Marc Munoz (Cal Poly ’12) will also return to the team to lead our efforts in 2017-2018 to expand to campuses across the country.

“I am extremely pleased that five of our current consultants have made the decision to return to their teams this upcoming year. Their knowledge and experience will have benefits that are felt throughout the entire membership,” said Michael Morin (Loyola ’11) Director of Chapter Services. “Through their day to day interactions with undergraduates and stakeholders to the countless hours driving, working on reports, or staffing our programs, these men are a true testament to what it means to embody The Creed of Phi Kappa Psi.”

Along with the returning consultants, five new consultants have been hired: