A brother on a mission

Have you ever heard the phrase, “It only takes one”? Scott Salmon F&M ’09 sent one tweet on May 31st and became an overnight sensation garnering 3,800 retweets and 2,900 likes. Why? “I offered pro bono legal services to those who had been wrongfully arrested participating in Black Lives Matter protests,” shared Salmon.

A graduate of the Washington & Lee School of Law, Salmon practices employment labor law, municipal law and civil litigation. He was admitted to the New Jersey State bar in 2015 and the New York bar in 2016. Before joining the private sector, he worked for Judge Eric Vitaliano in the U.S. District Court for Eastern New York. He also worked for the Honorable Michael McMahon (NY-13) in the U.S. House of Representatives. 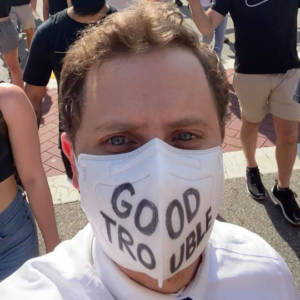 Salmon has been an active supporter of the Black Lives Matter movement and equality for all since the 2014 shooting of Michael Brown in Ferguson, Missouri. “I began offering pro bono services to help those who are young, may never have been arrested and may not have the money for a private attorney,” said Salmon. “I offer pro bono services to be active, to be an ally. You can post on social media, but you must do more if you can. Do what you can to help others. I started attending Black Lives Matter rallies before George Floyd’s death. Since his death, I’ve attended several rallies.”

After extending the offer on Twitter, Salmon has had 20 people contact him asking for his assistance. On June 25th, one of his clients was released from jail after being arrested for resisting arrest and violating an emergency order in a case of mistaken identity. Others who were arrested have been released since and charged with misdemeanors.

Salmon has represented hundreds of clients in his time in the private sector. One of his more prominent cases was related to election ballots in Dover, New Jersey during the spring of 2017. Approximately 70% of Dover’s population identifies as Hispanic. Salmon petitioned the county clerk to provide bilingual election ballots. After his initial petition was unsuccessful, he researched state laws and found what he was looking for. New Jersey law states that ballots must be printed in both English and Spanish if at least ten percent of the population identifies as Hispanic. “I sued the county and took the case to the appeals court in New Jersey. In the end, we won the appeal and the ballots are now printed in English and Spanish.”

Want to learn more about becoming an ally? Find resources in this blog post: Brotherly love in a time of hate

Have a unique story or experience that you would like to share? Email marketing@phikappapsi.com with your name, chapter and initiation year and brief background information for consideration.