Skip to content
Brotherhood from a distance: Stories of the 2020 pandemic

Brotherhood from a distance: Stories of the 2020 pandemic

“It’s hard to stay focused when the world around you seems to be in a chaos of uncertainty. So, adapt and plan your day out in a calendar to be certain that you will go on that run, work on that project, and strive for those goals that you’ve always had.” – Kevin Norgaard UC Irvine ’17

At the end of March, Phi Psis across the country had plans for the spring, summer and beyond. The graduating class of 2020 was ready to get fitted for their caps and gowns, and younger brothers were preparing to wrap up yet another year as students pursuing robes of their own.

Then everything changed. Midterms and spring break trips were postponed or in many cases outright canceled with COVID-19 forcing the world into an audible.
Government shutdowns and campus closures in response to COVID-19 have impacted us all in a myriad of ways. For alumni, “work” turned into “working from home” or no work at all. For the undergraduates, common corporate tools such as Zoom and conference calls became the new norm for instruction and lectures. Now, late in summer, we live in a “new normal,” many still adrift on our own small islands.
As one of the hardest hit states in the U.S., California continues to fight a battle much larger than the one engulfing the rest of the country. The golden state of the west has been fighting COVID-19 since March. We had connected with a recent grad from Phi Psi’s California Kappa chapter at UC Irvine to share how the pandemic has impacted him.
Kevin Norgaard UC Irvine ’17 was planning on wrapping up his senior year with chapter brothers in Newport Beach, celebrating their last spring formal along the famous “Strip.” Instead of festivities and ceremonies, Norgaard was faced with the realities of a shutdown – going from several roommates to nearly living alone, as people returned home to isolate, to survive, to be safe. Without a doubt, the hardest change for him was staying positive and motivated while living in isolation. Loneliness is a constant struggle. “It was hard for me to admit to myself that I was feeling lonely,” shares Norgaard. 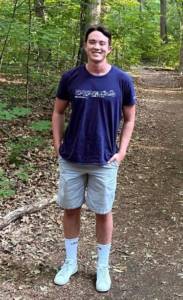 While everyone had to find their own ways to cope with life changes from the pandemic,  Norgaard tried to maintain some normalcy, while also exploring new life skills and interests. He utilized Zoom and Facetime to stay in touch with his chapter brothers, at one point even participating in a surprise Zoom meeting for a birthday party, playing online trivia and having a virtual happy hour – things many of us have done since the pandemic began.
With limitations on large gatherings and many still avoiding going into public, daily interaction with friends and family can be difficult. Norgaard makes an extra effort to reach out to friends he used to see on a regular basis, pointing out that “with the mental toll of these stressful times, getting a call from a friend can be like good medicine.”
While things have been difficult for him, as they have been for all of us, there is hope. With the newfound time to grow and develop, Norgaard dove into podcasts and books, learning about different political perspectives and ideologies while also “adulting” and exploring the worlds of taxes and investing. With so much change, relationships and pastimes adapted while “free time” takes a whole new meaning.
Norgaard began his career as a software engineer over the summer in Michigan. While an initially planned family road trip became a mask-required, socially distanced flight on his own – one thing he has gained from this experience more than anything is perspective; What was once taken for granted, now seems to make all the difference: seeing friends and family, having time to learn and grow and the chance for introspection. Norgaard says that he has learned to be grateful for many things he used to take for granted like going to the gym or having access to a variety of restaurant and entertainment options. Hugging his own family, seems especially important at times like this. He knows he won’t take that for granted, ever again.
“Most of all, I am looking forward to going about life without worry in the back of my head, and those stay-away-from-me facial expressions. I just want life to be normal again, with basic human-to-human interactions.”
—

Brother Dobin is a freelance writer in Minneapolis, Minnesota. He graduated from the University of Minnesota in 2019 with a Political Science degree and Leadership minor. Since graduating, he has been heavily involved with his local chapter by serving on the alumni advisory council as well as on the national level, being an active member on the Communications Committee.

How has your life changed due to COVID-19? Share your story here.