Every year on the third Monday in January, we celebrate Martin Luther King, Jr. Day. This holiday is to honor and commemorate the legacy of the civil rights leader; a fundamental figure in ending legal segregation in the southern United States.

Martin Luther King, Jr. was born on January 15, 1929, in Atlanta, Georgia and spent his life in pursuit of the service of others. In 1955, Dr. King received his doctorate in systemic theology from Boston University and was the pastor at Dexter Avenue Baptist Church in Montgomery, Alabama. That same year, Rosa Parks was arrested in Montgomery after refusing to give up her seat on a public bus to a white passenger; she was charged with violating local segregation laws. This sparked civil rights activists to gather and form the Montgomery Improvement Association to boycott the bus system. Dr. King was chosen as their leader.

From that point on, Dr. King became an ever-present voice in civil rights and race-related issues. He formed the Southern Christian Leadership Conference and began traveling and speaking throughout the country, in which he advocated for peaceful protests against the injustices suffered by the black community.

By culmination of efforts of King, and so many other civil rights activists, the Civil Rights Act of 1964 was passed. According to the Library of Congress, “the law’s eleven sections prohibited discrimination in the workplace, public accommodations, public facilities, and agencies receiving federal funds, and strengthened prohibitions on school segregation and discrimination in voter registration.” The same year, Dr. King won the Nobel Peace Prize.

In 1968, Dr. King travelled to Memphis, Tennessee where he was to support a strike for sanitation workers. On the eve of April 4, Martin Luther King, Jr. was assassinated on the second-floor balcony of the Lorraine Motel. He was 39 years old.

Even though the first federal holiday was celebrated in 1986, several states pushed against the legislation, and it was not until 2000 that every state observed Martin Luther King, Jr. Day.

Today, nearly 54 years since his death, Dr. King’s legacy continues to inspire and serves as a pillar of hope and justice.

While attending Boston University, Martin Luther King, Jr. joined Alpha Phi Alpha, the first intercollegiate Greek-letter fraternity established for African American men. He was initiated in June of 1952 and his brothers supported him throughout his life. According to The Martin Luther King, Jr. Research and Education Institute at Stanford University, “Fraternity brothers supported King during the Montgomery bus boycott, sitting behind him at his trial and donating money to the Montgomery Improvement Association.” 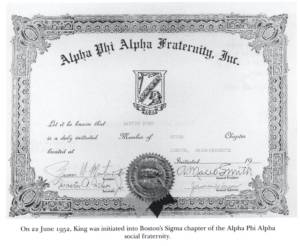 The connection to brotherhood exemplified by Dr. King and his brothers is a true example to us all. It reminds us that whether we are going through good times or bad, our brothers will be there to support and uplift us.

Check out Dr. King’s Alpha Phi Alpha membership certificate from 1952 to the right.