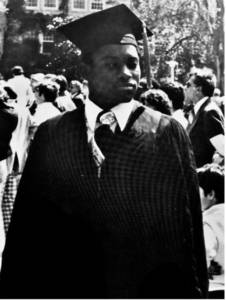 Estes Benson did not have a nickname, we just called him Estes. He stood out easily – tall, athletic, and gregarious, with a disarming smile and natural charm. He had a commanding presence when he walked into a room and pushed himself to succeed in every endeavor – academics, athletics, and life. He was also Black, and at his initiation with my pledge group, the first African American brother in Rhode Island Beta.

One of my fondest memories was the Thanksgiving after my family moved away. A few brothers, including Estes, had extended heartfelt invitations, but I felt it was a family occasion and not wanting to intrude, politely declined. In the late morning of Thanksgiving Day, the hallway pay-phone rang (there were no mobile phones in those days). I was the only brother in the house for the long holiday weekend, so I answered it. Estes spoke: “I’ll pick you up in twenty minutes, be ready” and hung up. I spent the afternoon treated to a delicious family meal and wonderful time with his family.

Maybe more in retrospect, I can see the challenges that Estes faced as one of the few Black men in the fraternity system. While Estes was quite popular, he still had to behave in ways to meet the expectations of a predominantly white society and to fit in and be accepted on and off campus. While he had a natural drive to do his best, I think he felt pressure to exceed and prove himself as a Black man. Looking back, I wish I had better understood this and had taken the initiative to have in-depth conversations about the challenges he faced.

To read Brother Goding’s full story on Brother Benson, keep an eye out for the upcoming edition of The Shield.

The University of Rhode Island has established the Benson Scholarship Endowment Fund for those interested in donating in Estes’ memory.