Throughout his life, Brother Price epitomized what it meant to be a Phi Psi, a generous, compassionate, and loyal comrade. He made an incredible impact on the brotherhood, at the chapter and national level, most recently serving as National President (2018-19). Brother Price resigned as President of the Fraternity in March of 2019 to focus his time on his family while continuing his battle with cancer. 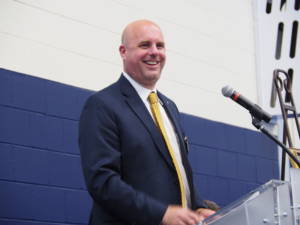 He had previously served in all three other Executive Council positions, as well as Attorney General, and numerous alumni association and house corporation offices.

In his first President’s letter in the Summer 2019 issue of The Shield, David Moyer Alabama ’91 shared “There is not an Alabama Alpha Phi Psi who is more respected or revered than Shannon Price.” He will be missed, and his memory treasured by many.

National President Moyer has declared a 30-day period of mourning in memory and gratitude for the life of Price. Brothers should shroud their badges and chapter shields in mourning as outlined in Rituals and Ceremonies of the Phi Kappa Psi Fraternity, effective through Thursday, November 26.

Services originally planned for October 31 and November 1 have been cancelled. We will update this release with any future plans if and when they become available. Condolences can be sent to rkr@phikappapsi.com or the National Headquarters Office to be shared with his family.

Phi Kappa Psi Fraternity is a 501(c)(7) association of men of integrity who strive to develop the individual in his intellect, involvement in the community and faith. The Fraternity was founded Feb. 19, 1852 at Jefferson College by William Henry Letterman and Charles Page Thomas Moore. The Fraternity currently has more than 100 chapters across the United States, 6,500 undergraduate members and 80,000 living alumni.