For over 40 years, Dave Moore (Wittenberg ’61) has dedicated his life toward helping others. Beginning at an early age, Moore watched and learned from his mother as she volunteered more than 8,000 hours for the Cleveland Museum of Natural History. As he was considering college and would later join Phi Kappa Psi at Wittenberg University, it seemed only fitting that he would affiliate with an organization based on The Great Joy of Serving Others. During his time as an undergraduate, Moore served as pledge class president and then president of Ohio Beta for two terms. Later, he would be inspired by his wife who had given generously of her time to organizations like St. Margaret’s Guild and affiliation with the Junior League in several cities.

“I was very moved by what I saw in my fraternity and with my family,” Moore said.  “Therefore, I wanted to do my part to make my community a better place to live in and work.” 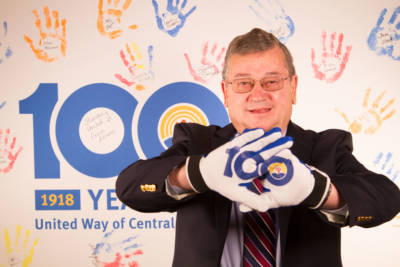 Following graduation in 1964, Moore began working for IBM where he remained until retirement in 2003. Throughout his tenure, he worked in various sales, marketing, and management positions including overseeing a major volunteering and technology event on behalf of IBM for the International Special Olympics games that were held in South Bend, Ind. in 1987.  That same year, Moore moved to Indianapolis and was seeking a way to stay involved and help others. That’s when he contacted Easterseals Crossroads, which began a 30-year volunteer experience. As a long-term board member including two terms as Board Chair, Moore not only had the opportunity to give hope to those with disabilities, but he also had the opportunity to improve the organization’s operations.

“Easterseals Crossroads is truly a wonderful organization,” he said. “When you have the opportunity to meet and work with clients and their families while hearing about their challenges in achieving independent and productive lives, it’s very inspiring knowing you had a hand in helping others.”

In 2008, Moore was able to combine his passion for technology for persons with disabilities along with his dedication to service as he assisted in expanding the agency’s Assistive Technology Program. That program enables clients and helps families achieve independence and better preparation for employment opportunities. Additionally, when he saw the potential to encourage incoming Easterseals Crossroads board members, he took it upon himself to become a mentor for new board members as they joined the organization.

Beyond his service to Easterseals Crossroads, Moore has remained an active volunteer, including being appointed by then Indiana Gov. Mike Pence to a board position with Ability Indiana, which oversees purchasing programs for persons with disabilities statewide. He also served several terms on the board of the Governor’s Planning Council for People with Disabilities. With a legacy of service to his community, Moore was nominated in 2018 by Easterseals Crossroads President Patrick Sandy for a United Way of Central Indiana 100 Heroes Award. He, along with ninety-nine others, were recognized in April at a special ceremony at the Indianapolis Motor Speedway where community hand raisers and game changers were celebrated for their accomplishments.

With a passion of service and a lifelong love for doing what he can to make central Indiana a better place for residents, Moore is showing no signs of slowing down.

“Although I recently retired from the Easterseals Crossroads Board of Directors after 30 years, I am certain I will still be involved with some future volunteer activities,” he said. “My son Bradley has also been serving on the board for several years, which gives me great personal pride. When you enjoy serving others, it will be hard to stay home.”