Back in the 1970s and early 80s, the brothers of Pennsylvania Lambda would raise thousands of dollars to help local State College charities.  Each spring, the Phi Psi 500 would awaken the Pennsylvania State University student body out of winter hibernation and onto the streets and sidewalks of State College (Pennsylvania) for a day of sun and celebration.  Back then, over 2,000 participants of the Phi Psi 500 would race around the town of State College, starting and finishing at the Phi Kappa Psi house.  The majority of racers, however, had no worries about their race times.  Instead, they dressed in outlandish outfits and paraded merrily along the route as their playground for the day. 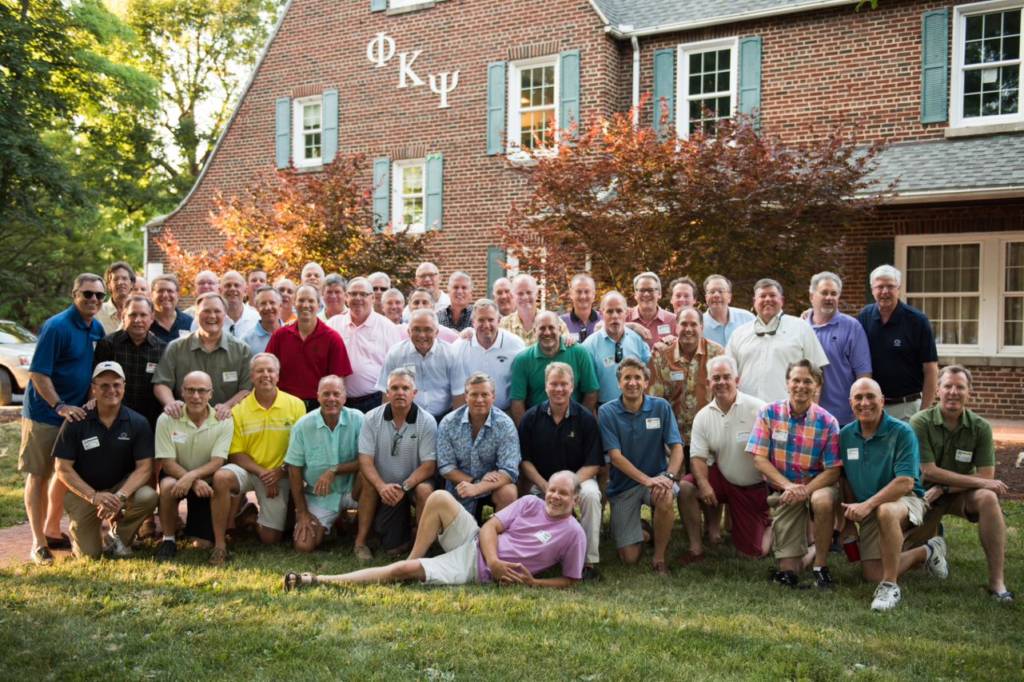 Greg (pictured front) and his chapter brothers in front of the Penn Lambda house.

Brother, Greg Laderer (Penn State ’78) designed many of the popular race day Phi Psi 500 T-shirts back then. The brothers loved his artwork and many saved their shirts and still treasure them all these years later.  And, they gave proof to something else they all treasure — the deep bonds of brotherhood.  Little could Greg have conceived back then, that these same brothers would be banding together again some 40 years after their college days to raise money to save his life.

In December, 2016, Greg was diagnosed with Stage 4 non-small cell lung cancer and discovered it had already spread to his spine, ribs, liver and brain.

If there is a glimmer of hope to accompany such a devastating diagnosis, it’s that he also tested positive for the ALK gene mutation, which is a rare type of lung cancer typically affecting non-smokers. Until recently, very few treatment options existed for this cancer, but thanks to cutting-edge drug therapies being developed, patients like Greg are living longer.

Fortunately, Greg’s cancer is suppressed for now as this targeted therapy inhibits the gene from signaling.  Unfortunately, the drugs he takes are only effective for a period of time before the cancer sub-mutates and returns with vigor. His longer-term survival is dependent on continued advances in medical research to develop newer and better treatments. ALK Positive patients around the world, being keenly aware of their predicament, have united via social media to share information and emotional support. They also raise money that influences the direction of research that one day will save their lives. In a short period of time, the ALK Positive Organization, comprised of patients and their caregivers, has raised over $600,000 and awarded three research grants to test new immunotherapy treatments for ALK Positive patients.

Learning of this, Doug Laderer (Penn State ’79), Greg’s younger sibling and chapter brother thought of a different sort of race — a bicycle race, complete with custom race bibs stating “Cycling to Save My Brother.”  And like the Phi Psi 500s of years past, it would support a great cause. This time, it would be about raising awareness and funds to provide research for Greg and all current and future ALK-Positive patients.

Doug and his daughter Sarah would ride 335 miles from their homes in Pittsburgh to Washington DC along the rails-to-trails corridor. 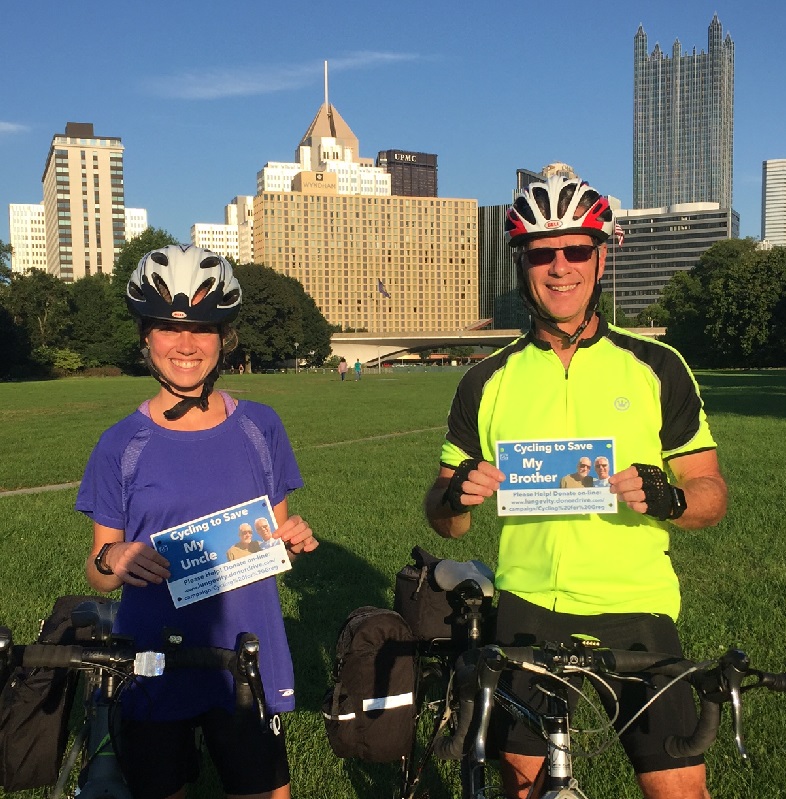 With smiles on their faces at the start of the race, Doug and Sarah Laderer identified who they were riding to support.

Doug introduced this idea to Greg in August 2018, and both agreed that the Phi Psi brotherhood would be a great place to start soliciting support. Doug sent an email with an explanation of Greg’s condition and a call for help to approximately 80 Phi Psi brothers from their era.  The emotional support and funds began pouring in from across the country.  Bob “Booker” Moore (Penn State ’78), a former Penn State cheerleader, was instrumental in further rallying the brotherhood with additional encouraging emails to help the wheels of the campaign begin rolling.

The original goal was to raise $10,000. The Phi Psi brothers surpassed this in just eight days.  Greg and Doug were overwhelmed by the emotional and financial support of the Phi Psi brotherhood. To date, the campaign has raised over $30,000 with the brothers donating the majority. The remainder of donations have come from friends and family outside of the brotherhood. 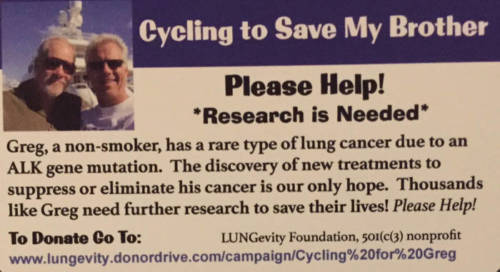 To explain his mission, Doug had double-sided cards made with information regarding Greg’s cancer fight and how others can join the effort.

“I was speechless over the love and support I experienced coming in daily from my brothers, many of whom I had been out of touch with for literally decades,” Greg said.

Due to substantial rains in September, the tow path along the course between Cumberland (Maryland) and Washington became flooded.  Doug and Sarah met the challenge and made a round trip, instead, from Pittsburgh to Cumberland and back, still covering the promised 335 miles of inspired biking.  Thinking back on the experience of the bike path and with the Phi Psi brotherhood, Doug stated, “Like our bike ride, life takes unexpected detours, but the love and support of the Phi Psi Brotherhood never wavers.” 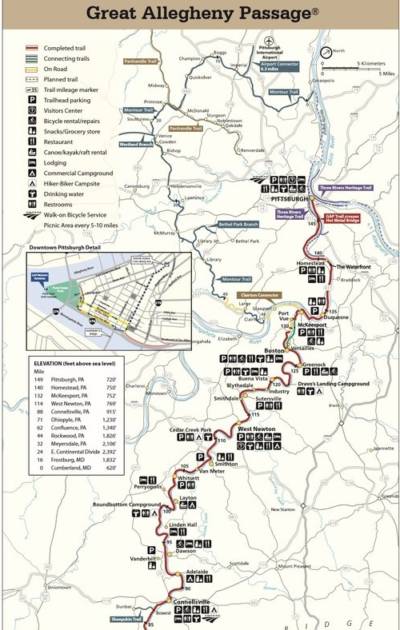 To support Greg’s fight against ALK-positive cancer and to raise money for LUNGevity Foundation, Doug and Sarah Laderer went on a bike ride from Pittburgh to Cumberland (Maryland). 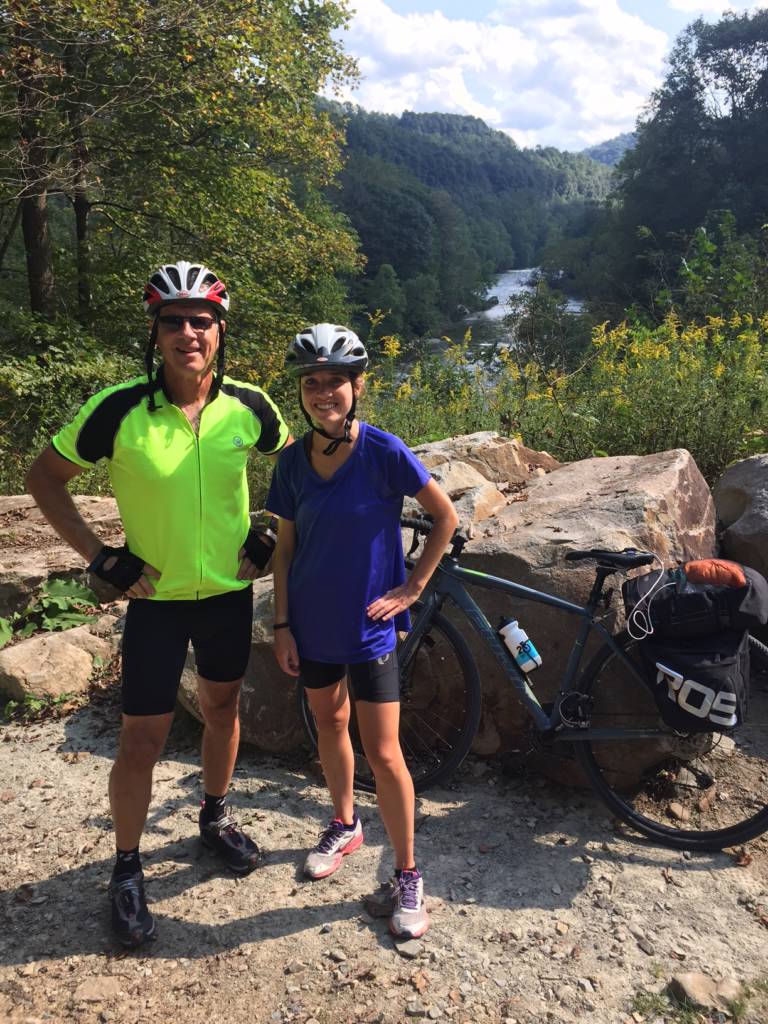 Along the bike route, Doug and Sarah Laderer stopped long enough to pose in front of the Yough River. 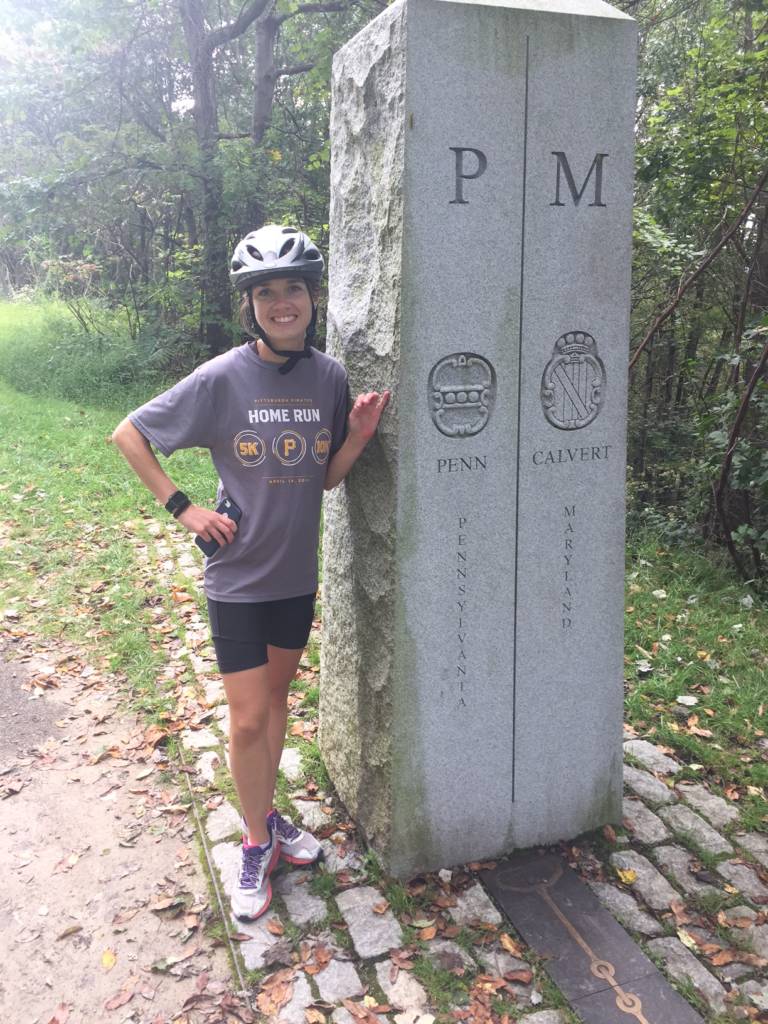 The bike route included a stop along the Mason-Dixon Line for Sarah Laderer and her father. 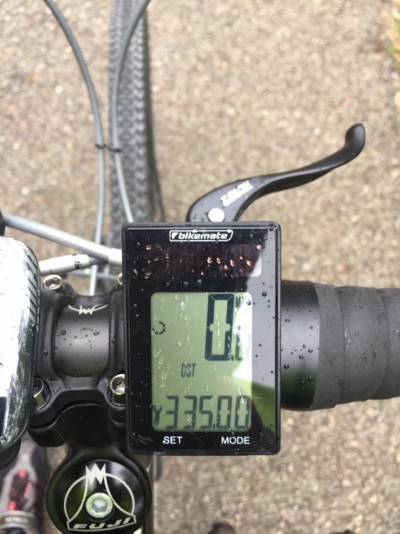 Nearing the homestretch of the race, Doug’s bike hit 335 miles. 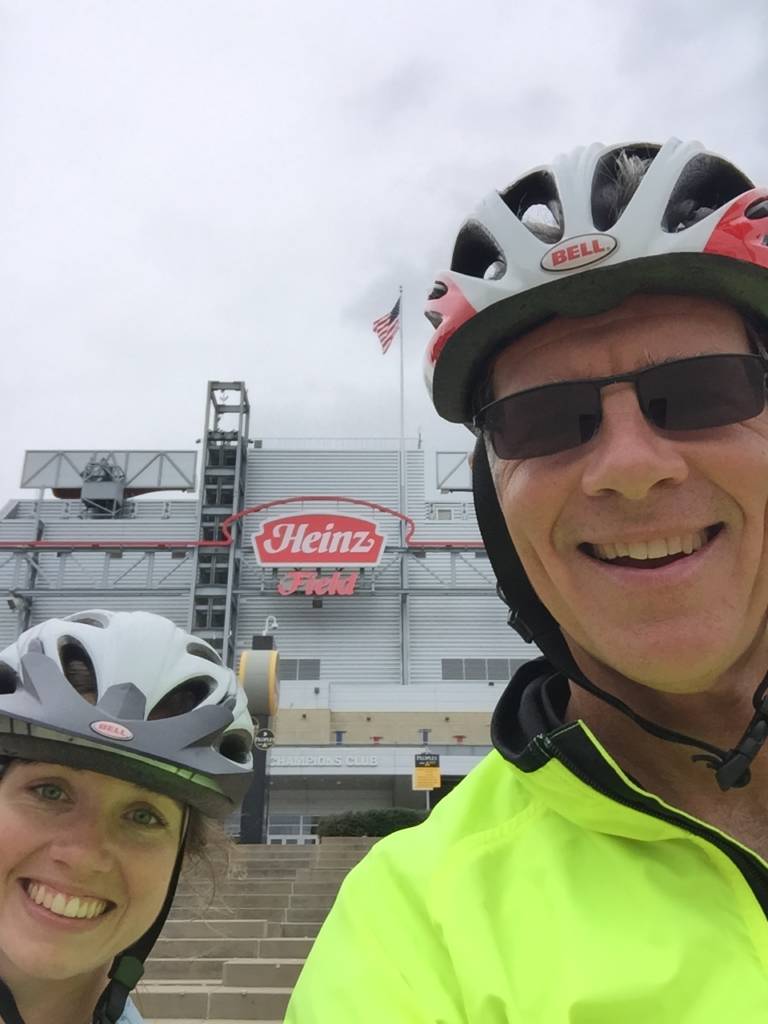 Doug and Sarah ended their bike route at Heinz Field and PNC Park in Pittsburgh. 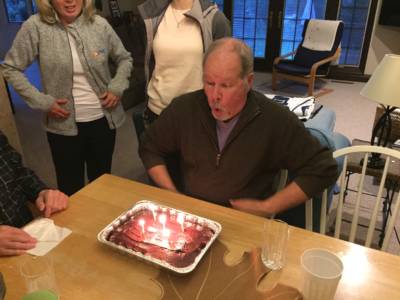 Following the race, Greg surprised Doug and Sarah in Pittsburgh to celebrate his 60th birthday in September 2018.