Before giving official orders to commence Operation Overlord, the code name for the battle of Normandy, Supreme Allied Commander General Dwight D. Eisenhower delivered a speech to those soldiers, sailors, and airmen about to embark in the most significant battle of World War II.    “I have full confidence in your courage, devotion to duty and skill in battle. We will accept nothing less than full victory!” 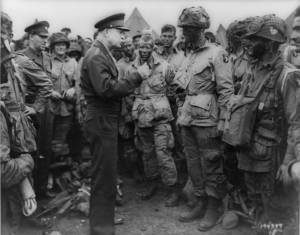 Eisenhower speaking to a group of soldiers

75 years later, we know the results of the D-Day invasion, as well as the attacks on Utah, Omaha, and on the other beaches on Normandy. It truly was the turning point that allowed the Allied Forces to successfully invade German-occupied Western Europe. The brave soldiers, sailors, and airmen who served as part of Operation Overlord and Operation Neptune, the actual Normandy Landings, are true heroes who are most deserving of the word. 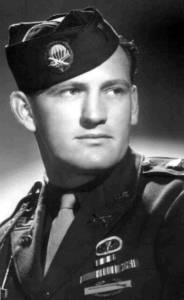 Phi Kappa Psi saw many brave brothers take part in numerous aspects of the invasion, from assisting in the planning and aiding in logistics, to filming and observing as correspondents, to serving as officers, soldiers, sailors, airmen, and medics in the field of battle.  The experience of one of our brothers, 1st Lt. Lynn D. Compton  (California Epsilon ’40), was depicted in the HBO Miniseries Band of Brothers, which chronicled the 506th Parachute Infantry Regiment in the Army’s 101st Airborne Division.

After parachuting into Normandy during the early hours of D-Day, Compton was part of the assault group that destroyed the German artillery during the battle at Brecourt Manor. He was awarded both the Silver Star and Purple Heart.

Another notable brother, Col. Bernard B. McMahon (Indiana Alpha 1913) engineered the first large scale surrender of German troops in Normandy following the invasion, and  was instrumental in the liberation of several German concentration camps.

Today we ask that you take a moment to remember, recognize, and reflect on the important and harrowing undertaking that took place starting on those shores in Normandy, June 6, 1944. But we also ask you take an extra moment to remember the Phi Psi’s we know to have given their life there to stem the tide of fascism.

To learn more about impactful men of Phi Kappa Psi, check out our searchable Shield Archives.