Indianapolis (May 29, 2019) – The Executive Council (EC) has appointed David Moyer (Alabama ’91) as the 67th S.W.G.P. (National President) of Phi Kappa Psi Fraternity, effective today and will remain until the 2020 Grand Arch Council. He was appointed following the resignation of former President Shannon Price due to health issues. Moyer previously held the position of Treasurer. Following this restructure, Burns Davison (Iowa ‘79) has since filled the position of Treasurer on the Executive Council. 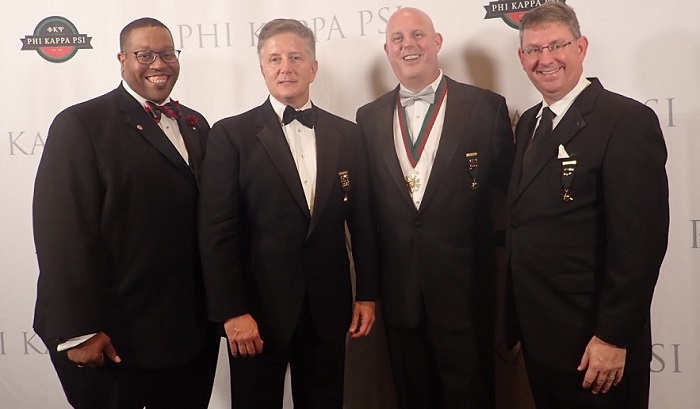 We are proud to introduce our Executive Council for 2018-2020 biennium. Each of these men have contributed great things to Phi Kappa Psi from their servitude, and we are excited to support their leadership during this time.

Following the Grand Arch Council, the new EC held their first meeting together.

Several highly-debated topics were discussed, including a focus on fraternity education practices due to dangerous behaviors within Phi Kappa Psi and other Greek organizations. In February, after careful consideration of factors creating unhealthy cultures in chapters, the EC approved a 10-day new member orientation period, as opposed to the current six-week model that has been used for the better part of two decades. GAC allowed members to engage in dialogue regarding the efficacy of such a policy and the direction the brotherhood should head. The EC entrusted alumni, undergraduates, and staff to discuss the topic at length, and at least 25% of GAC attendees debated this topic at any given time. Over the course of four committee meetings, determinations were made:

Following GAC, the Executive Council voted on several directives for the 2018-2019 school year, including:

“The EC is encouraged and inspired by the brotherhood and the commitment toward creating a healthier future for Phi Kappa Psi,” said Phi Kappa Psi national president Shannon Price (Alabama ’88). “We look forward to the growth as we chart a new course for our new member education efforts.